Governor Lingle speaks with MacDella Cooper, a former refugee of the Liberian Civil War and now a humanitarian raising awareness of the plight of Liberian children. 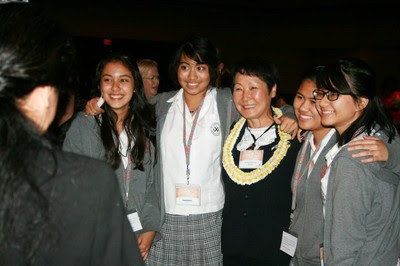 During the one-day conference hosted by Governor Lingle, remarkable women leaders each shared their incredible story of success and perseverance. Their deeply moving and personal stories of overcoming challenges and holding strong to goals and aspirations inspired the approximately 1,000 conference delegates to move forward with their own hopes and dreams, while contributing to the local and global community.
Governor Lingle pointed to two commons themes the women leaders discussed during the conference.

First no matter how successful women have become in their careers, their accomplishments are without meaning unless they use their success for a higher purpose – including mentoring young girls and boys – to make a positive impact on the future.

In addition, the women leaders, including some from developing and war-torn nations in Asia and Africa, conveyed that peace and stability in the world will only come when women are in positions of shared authority.

The Governor encouraged the delegates – which included Hawai‘i women and men from the fields of business, marketing, health care, government, international relations, the military and community service; students, both boys and girls; as well as individual women who are who are working to rehabilitate their lives and preparing to re-enter the community – to commit to mentoring the next generation to help them become leaders and define the their own vision of success.